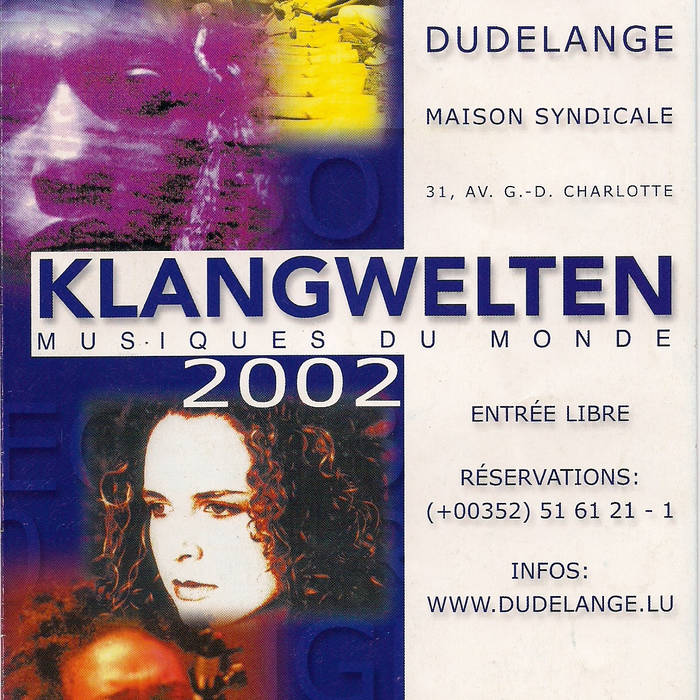 I first met Rudiger Oppermann through the international harp community, when I was playing with Barbara Imhoff (Aether) in San Francisco which hosts a Harp Festival. Oppermann is an interesting musician and producer and self-taught ethno-musicologist (a title he hates and denies). For about 30 years he has been traveling the globe, usually doing three international trips between late Winter and early summer, to places as diverse as Madagascar, Central Africa, the Cook Islands, Korea and many more - not to mention all the European nations. He goes in search of musical talent, with a particular interest in showcasing indigenous musical traditions that are not typically brought to Europe's stages. Many of these performers have never even thought of themselves as "musicians" before - it's just what they do. To be honest, the new awareness has sometimes brought mixed results, not always for the better. But that's a puzzle perhaps best left to the anthropologists...I know that the European audiences are thrilled by and supportive of these raw talents with many becoming involved in charitable efforts and travel opportunities to lands they would not have visited otherwise. This part is good.

Oppermann also invites virtuoso musicians who may be well-known in their country of origin, and often come from a long traditional line of master musicians, but who are completely unknown outside of their country and particular niche. Many of these, like Enk Jargal of Mongolia and Jatunder Thakur, have ended up living in European countries for many years and being key recurring figures in Oppermann's annual tour, which brings together several diverse vocalists, rhythmatists, instrumentalists, both soloists and groups selected from his travels. He has had quite the task on occasion managing the logistical and technical aspects of bringing artists from far-away places, some of whom have never been on an airplane before! A documentary was made about his work in about 2013 but as yet is not translated into English. For more information on Rudiger Oppermann and Klangwelten, please visit his website at www.klangwelten.com

Klangwelten is different from year to year and yet there is kind of a formula I gradually noticed after years of both performing in, doing support work for, touring, and recording with, various incarnations of the festival. For my part, Oppermann featured me as a vocal soloist and experimental improviser, using electronics. Each group or soloist typically is given stage time to showcase what they normally do and then, Oppermann starts to team up diverse musicians into new ensembles, ending with a group piece that includes everyone. Through my work with Klangwelten, I had the pleasure of hearing songs of mine transformed by innovative arrangements and unusual instrumentations. I also met and befriended over a hundred musicians based in Germany and around the world by association with the Oppermanns.

After that first tour with Klangwelten in 2002, we continued to write and record together in a number of different situations. I was a regular teacher and performer at the Sommermuskifest, another festival organized and run by the Oppermanns. My class there, "Adventures in Voice" yielded some very interesting improvised vocal recordings with long-time students. My time with the Oppermanns included a year and a half during which I lived at the family farmhouse and music studio in Alsace, France, host to many international traveling musicians and intimate performances. The collaboration came to a natural end, after many fruitful years, when I moved from Alsace, France, after a decade in Europe and the UK, on to a new musical chapter based in New Orleans, LA, in January 2015.