Found at the Scene of a RendezVous that Failed

from The Beckett Songbook, USA​-​Germany, (Work in Progress) by Diana Rosalind 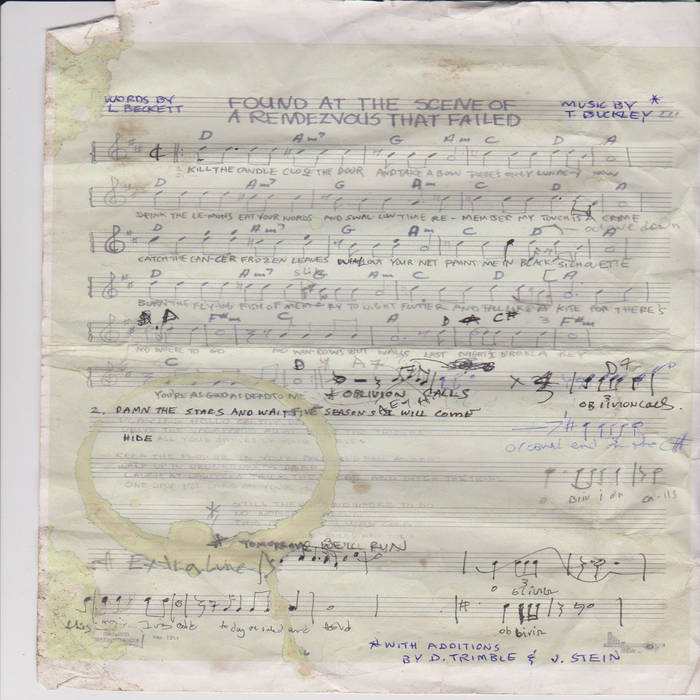 The first thing about this that was a challenge to me was setting the last line of both verses of Larry's poem. The 5th, changing, line was left off of Buckley's notes with no indication of either what chords would be played or how the melody would be sung. Larry suggested a couple of chords that would fit (A7 and then D).

So after becoming familiar with the melody and lyrics thus far, I came up with a melody for the chorus, that seemed to naturally occur from riffing off the melodic themes that had been established in the tune and playing off the alternating substitution of D moving to C sharp and D moving to C natural. The rhythm of the words (Oblivion calls in the first verse and tomorrow we'll run in the second) and where they were placed in the text suggested they be repeated as a chorus. In keeping with the strong sub-beats emphasis on 3rd and 5th beats pattern, (echoed lyrically in the line "wait 5 seasons") as well as the additional 5th line of poetry on each third stanza of verse, the refrain is sung 5 times, with 3 rhythmic changes.

A breakthrough occurred when in rehearsal I began to pay closer attention to the significance of Buckley's notation that the piece was in halftime (a C with a vertical slash through it); meaning that each bar of 4/4 is to be regarded as actually two bars. But in addition to just being a quicker way to notate tricky phrases with the fewest pen strokes, it could also be intended as a way of saying "count this in 8". Tim's atypical musical notations, with their dotted half notes and quarter note rests at specific places in measures are much easier to grasp when using a count of 8. From this approach, the song started to find its particular feel, with different beat emphases than those found in typical 4/4. I also went through a range of BPMs from as slow as 66 with the best takes ending up being around 100.

For me as a singer, having already worked with setting Larry's text on two other pieces, as well as having recorded a version of the Beckett-Buckley composition Song to the Siren in 2003, and having sung through a number of other of their works, I felt really comfortable letting the music and words inspire me to expand on Buckley's original material in a way that felt true to his style and expressions and the right setting for Beckett's text musically. Basically, by taking the set-up already in place from the beautiful, haunting melody of the verse, in combination with the movement suggested by the lyrics, and just playing through it a few times, the embryo of the melody spontaneously occurred to me and with it the idea of briefly going into double-time in the melody, and finishing with an echo of those strange beat emphases of the verse in the final repetition. Chord-wise, the cello ended up doing a half bar of A7 then a half of D7, twice, back to A7 but a different voicing, then to Dm7 and then with a turnaround back to A7

Another interesting thing is that after singing through several Beckett-Buckley compositions I've determined that I seem to have a practically identical range to Buckley only in a female voice. His songs are always in the perfect key and part of my range for me and this one was no exception.

Lyrically, I felt very strongly connected to the theme of waiting for someone who never arrives, both literally and figuratively; this painfully slow experience of time expressed by a poetic voice that seems to be torn between hurling nihilistic curses at its beloved and powerfully invoking an alternate vision of an idealized future union. This is the tragicomic melodrama of love that makes us humans both ridiculous and wonderful and is a near universal experience. I loved singing these words.

Uncovering this was like a piece of musical detective work and I am extremely delighted with the results. Being simultaneously a reconstruction/premiere recording of someone else's incomplete score and a "cover" interpretation of it, with original additions, meant that while I always established each verse melody strongly in Buckley's precise notation, once I had become familiar with the melody, phrasing and themes and had painted them clearly, I then did what any singer would do and allowed myself latitude to make subtle alterations, rhythmic/melodic deviations from the notation, and add ornaments.

The differences between the cello's 4 strings and the 6 string guitar, which Buckley would have accompanied himself on, created both specific challenges and allowed for fresh possibilities of harmonization, while the legato and sawing effects the cello creates gave the accompaniment a particular rhythmic drive and feel that is very different from the way a guitar drives a piece, especially without any percussion.

I did try playing through Rendez Vous with both a looped tambourine and the sound of a metronome, as if to signify a ticking clock, but in the end decided to do it in free 1/2 time, allowing the meter to breathe and stretch a bit as is appropriate to live performance, and recording (which this was).

The development process involved recording hours of rehearsal, discussion and development over a period of several days, which I edited down into a series of clips of the best takes and ideas. Gradually the new (chorus) section at the end came more and more clearly into shape as did the precision of the verses, the variations and instrumental passages, until ending up with the arrangement you hear.

I think it's a great song and can envision further evolutions of it with fuller arrangements and or additional/different instrumentation. A Celtic frame drum on verse 2 comes to mind as well as replacing cello with double bass.

kill the candle close the door and take a bow
there's only lunacy now
drink the lemons eat your words and swallow time
remember my touch
is a crime
catch the cancer frozen leaves without your net
paint me in black silhouette
burn the flying fish of memory tonight
flutter and fall like a kite
for there's nowhere to go
no windows but walls
last night I broke a key
you're as good as dead
to me
oblivion calls...