Untitled Vocal A Capella Improvisation with Electronics and Handbells (2014) 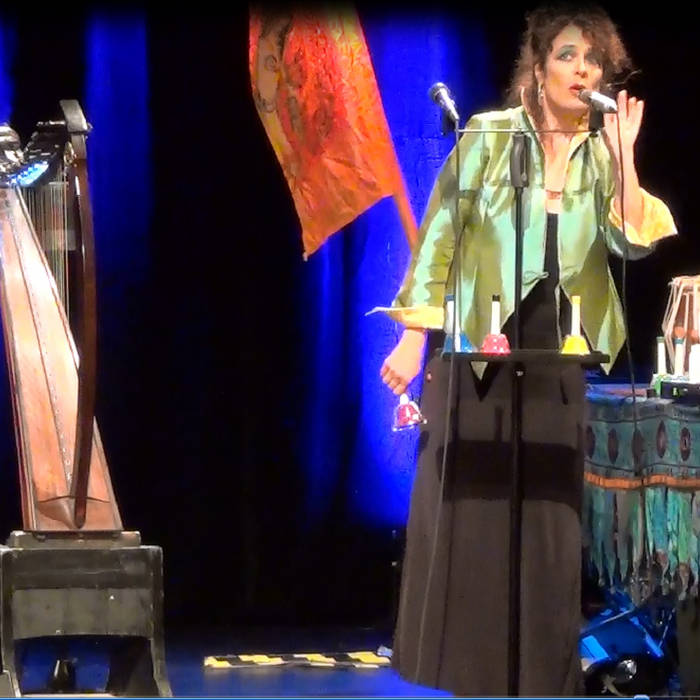 I've never been able to come up with a title for this wordless piece which is appropriate as if it's "about" anything, it's about communication beyond language, which is what music is after all. I have long been fascinated by the idea of the human voice as an instrument conveying only sounds, rather than using syntax and verbiage to transmit information. The use of electronics to distort and transform the vocal "data" extends this experiment even further.

On one microphone, I was using a TC Helicon rack-mount Voiceworks Plus (no longer in production), the most advanced voice-controlled harmonizer I've ever come across. I had programmed a series of chords and effects ahead of time, and used a foot-switch to click between them. The other mic was connected to a Roland VE-20, double-pedal vocal effects processor and looper. I used it on a shelf attached to the mic stand, rather than on the floor. The hand-bells I used for a tonic reference each time I wanted to switch to a different stacked harmony setting. It was interesting because the relationship between the hand-bell note and what I sang was completely obscure to my classically-trained instrumentalist friends in the audience, so I can't exactly explain my methodology here. I just knew that the harmony pattern would be in tune if I started on such and such a note, or I could deliberately do weird dissonant things that would make the harmonies bend in certain ways. This was a "structured improv" in the same sense as "North of the Future" from 12 years earlier. So, I had a few melodic motifs on hand, knew which effects I was going to use and what worked with each one, and I knew how I wanted it to end, but a lot of what happened in the middle changed fairly drastically from night to night. This recording was at the end of the tour when the piece had started to take on a more defined shape, however I had a strange technical glitch at one point when either the VE-20 or the condenser mic I used on that effect shorted out or something. I played with the weird noises that it was making and it became very fresh again and turned out to be one of the best performances.

The following night, in Frankfurt, I gave what was undoubtedly the best show of the tour. Naturally, of all the shows either videotaped or audio-recorded, that was the most magical one that was not documented. But c'est la vie! Whoever was there heard it and knew it was really special.

I'll never forget that night and was pleased to read in the weekend newspaper that it was considered the highlight of the show by the reviewer. I was in some seriously good company of musicians, so that was gratifying. But the best feedback I got was from the manager of the opera house where we performed who told me that he had no idea what he'd just heard but that he had loved it and felt like it was music from another planet. I've felt that way as an audience member before and so this was a great compliment to me.